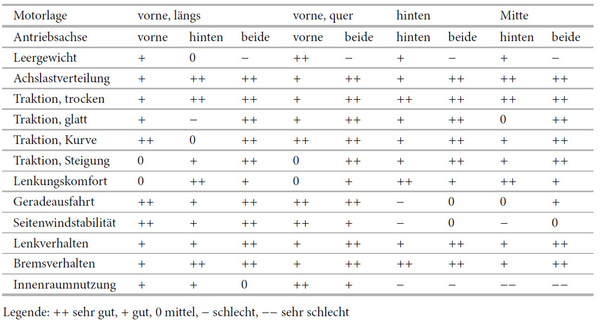 Mass and centre of gravity have a considerable influence on the performance of road and racing vehicles and have a direct influence on driving behaviour.

The mass of the vehicle and its basic conceptual layout also influence the position of the centre of gravity itself.

The following conceptual layouts regarding motor and drive position are common:

The following table lists the advantages and disadvantages of some of these concepts:

As a guideline value for optimum centre of gravity positions in relation to axle loads, experts call a ratio of approx. 45:50 (front to rear axle) for rear-wheel-drive vehicles. Evaluations of a sports prototypee´s drive on the Circuit de la Sarthe (Le Mans) revealed an optimum axle load distribution of 43:57 in relation to the lap times driven.

The Porsche 911 plays a special conceptual role in current racing cars. Its layout, rear engine – rear wheel drive, is to be evaluated on paper rather as disadvantageous. Ultimately, the disadvantages are mitigated by othe measures. Since the basic layout of the Porsche 911 is not entirely advantageous, it was decided to use a mid-engine layout for the 911 RSR (GTE-class). Here Porsche used the mid-engine kits of the Cayman and the 918.

In vehicles with rear engine layout, e. g., the centre of gravity is clearly towards teh rear of the vehicle. This leads to an oversteering driving behaviour due to the concept. In order to have more freedom in the final tuning of the driving behaviour and to be able to respond to the preferences of the drivers, a 50:50 axle load distribution is preferred in the best cas. On the basis of these, the driving behaviour of the vehicle can be adapted to the driving style of the pilot with little effort. A 50:50 axle load distribution also means that extreme mixed tyres can be dispensed with. In the ideal case, therefore, extremely wide tyres on the rear axle, compared to those in the front, do not have to be driven to counteract an oversteering basic behaviour. In current rear-wheel drive vehicles with high engine power, wider tyres are mounted on the rear axle, but not to the same extend as in historic racing cars with rear engines, such as the Porsche 935. Compared to the current 911 RSR, with a width of the front tyres of 300mm and the rear tyres of 310mm, the Porsche 935 had tyres with a width of 275mm at the front and 350mm at the rear.

During driving, the position of the centre of gravity in the vehicles coordinate system is also a variable value. When a vehicle accelerates, the centre of gravity moves towards the rear of the vehicle. In the eventof deaccelaration, it moves forward. When cornering, the centre of gravity moves in the direction of the outside of the curve. This means that, for example, in a vehicle with a front engine, the rear axle is greatly relieved when decelerating. This, in turn, leads in this case, with a concept-conditioned centre of gravity that is already relatively far in front, to nervous driving behaviour and thus a potential breakaway of the rear when entering a corner. Also for this reason, a neutral axle load distribution is preferred or aimed at in order to minimise such behaviour.

Anecdotes related to the topic from the history of motorsport:

Everyone knows the Audi Sport- Quattro S1 E2. At the time of Group B it was one of the most extreme rallye- cars outwardly. In contrast to the vehicles of its competitors, however, the S1 E2 had a decisive disadvantage due to the vehicle´s centre of gravity. The engine of the S1 E2 was located in front of the front axle. As a result, the centre of gravity of the car was also relatively far ahead. This resulted in a tendency to understeer. The vehicles of the competitors, Lancia (Delta S4), Ford (RS200), Metro (6R4) or Peugeot (205 Turbo 16), were consistently designed for a homogeneous axle load distribution. They all featured a mid- engine layout. Due to the conceptual competitive disadvantage of the S1 E2, it was, contrary to the subjective public oppinion, a not very succesful vehicle. By far the most succesful Group B car was the Peugeot 205 Turbo 16, mainly due to the above mentioned advantages by a mid- engine layout.

Simulation of the center of gravity in rFactor2:

As already mentioned in the introduction to this blog, we want to give you as much detail as possible about the implementation of various physical aspects in rFactor2.

Beforehand: How and from what is a vehicle created in rFactor2?

Basically, a simulated vehicle in rFactor2 can be divided into two areas. On the one hand there is the graphic part. This includes what we see on our screens, i. e. the 3D model of the corresponding vehicle in all its graphic splendour. On the other hand, and this should be the topic of this blog, there are a lot of files in the background which are used to calculate the driving physics of the vehicle.

To make it easier for the developer or the modder team to create a new vehicle for the simulation, Rfactor2 works with so called spreadsheets. These spreadsheets are extremely comprehensive tabular documents in which the creator of the vehicle must enter an incredible number of geometric and physical data, based on the real vehicle. The spreadsheet then creates the specifications for the required files, which ultimately describe/simulate the vehicle in the simulation.

The table document mentioned currently contains 22 sheets. Each of these sheets covers an area or assembly of the vehicle (see illustration 4).

As already mentioned and as can be seen in the illustration above, the single sheets deal with the respective assemblies of the vehicle.

In some of those sheets information must be given regarding the position of the respective centre of gravity. Using the example of the tank (sheet fuel), we will explain the treatment of the main topic in more detail.

The first basic required specification refers to the geometric size of the tank in the vehicle´s coordinate system. For this purpose, a body generated on the basis of 8 coordinate points is generated for futher calculations (Illustration 5).

In theory, this means that the mass and position of the centre of gravity of the tank in the simulation changes depending on the fuel level of the tank. If the fuel level drops lap by lap during driving, this has an influence on the position of the overall centre of gravity in the vehicle. Illustration 5: Overview; tank location in vehicle´s coordinate system Illustration 6: Calculations for assembly tank This allows, for example, the so-called „Full Tank Effect" to be mapped as close to reality as possible. „Full Tank Effect" refers to the change in driving behaviour after a pit stop without changing tyres, but with refilling the tank. The tyres are not changed during the pit stop and are worn out accordingly. Now when the tank is completely refilled the mass of the vehicle increases and the tires have felt significantly less grip when it goes back to the track than before the pit stop.

This is only one of the effects that can be presented on the basis of the information provided. The position of the centre of gravity and its behaviour during whiile driving can thus be simulated for each vehicle individually and solely on the basis of the „real“ data. This means that a value change is not prescribed, but that the physics model can simulate the main topic individually and vehicle-specifically. The influence of the change in the position of the centre of gravity during accelaration, decelleration and cornering mentioned above is also simulated on the basis of the data provided in the spreadsheets. Mass inertia and accelaration are used as the basis for the calculations. This in turn is based solely on the geometrc and physical specifications given by the vehicle manufacturer.

The above information in the spreadsheets applies to almost every assembly in the vehicle. Whether engine, transmission or driver, the centres of gravity of all these individual assemblies influence the overall centre of gravity accordingly. In the following blog articles it will become clear how detailed the simulation ogf physics in other areas is implemented in rFactor2. The more data you have from the original car, the more accurate the software is able to simulate it. Additionally we want to thank Studio397 for there very welcome support in the creation of these and the following articles!